Are these condoms real or not? Nobody knows. Nevertheless, there is something very certain, they will make rethink the name of your slogan.

The one I like the most. It has good momentum, sets you in the mood.

Would say it sounds too ‘proud’ -as Taiwanese say, or a bragging as I would say. In short, what Trump would say. Over-Promise.

Burger King – Have It Your Way.

Not bad. Sounds chill, easy going, an open mind with a free spirit. It feels like when you go on an airplane and the pilot says ‘enjoy the ride/trip’ sort of.

Since there is no slogan accompaning the naming, there is only the brand’s name. Which is to cold and descriptive. Indifference.

Although we all have a small pervert inside this crosses the line to something that sounds wrong. Creepy and distasteful.

Although we all have a little pervert inside us -yes, don’t be shy, you too, lustiness taken in a desperate way and merely as an animal sense just sounds wrong. And gross. Am I right?

The Home Depot – You Can Do It. We Can Help

Resourceful. Even though I wouldn’t want someone to interfere in ‘my business’ to help, it definitely denotes resolutive skills and sounds kind of encouraging there will be someone getting your back. I guess. That sounded very weird.

The thin line between ambition and greed. Not my style, maybe I’m a romantic.

Adidas – Impossible Is Nothing

Challenge is brought over the table in here. Defying. Your imagination seems to be the only barrier from keeping you to decide what’s next. No space left for the ordinary. Good slogan.

Nike – Just Do It

It may work in retail but wouldn’t in condoms, unless you had more than a drink and feel ‘libidinous’ or more than ‘itchy’ in…you know, there. Feels more in a mission than something to be delighted by or amused. Kind of aversive.

I’m more into ‘quality’ than quantity so I guess that makes me more romantic?

Gatorade – Is It In You

Too reflective and such a complex slogan for that moment. Being sober-headed and philosophizing about life in such a moment are not complementary.

Obviously, saying that a slogan doesn’t work as a condom brand doesn’t mean it not works. Every brand has a different mission and works in a different industry. However it will certainly make you reconsider a brand’s name.

I chosen this title but I could have chosen this other too ‘Why Copying Is Not The Answer To A Company’.

Let’s imagine you’re on a date and you like the person sitting in front of you, not just for ONS, you like him/her a lot, let’s say a potential relationship. However you don’t know how to grab that person’s attention. Wrong beginning. You go blank and suddenly your brain on an attempt to find a solution, flashes in your mind what your friend does.

Your friend has charm, conversation, always cracking a joke at the right moment. He/She has some kind of natural magnet to attract people. You know all of that but you don’t know how the hell he/she does it.

Under a bit of anxiety mixed with desperation you just try and replicate your friend’s behaviour and you push yourself to bring up conversation without actually knowing what the hell you want to end up going with that; then you try to be funny and crack a joke which sounds even more forced and odd.

Basically what you’ve done is this.

Yeah, you are doomed.

Intentionally or not you have tried being someone you are not because you know that mix of behaviour worked for your friend, but it definitely didn’t work out for you at all.

The answer is simple, you’re not your friend. And people feel that. The same applies for companies. Every single day you see companies replicating, following or just forcing themselves to be something they’re not, and that looks odd on people’s eyes.

Companies have better things to do rather than wasting energy pretending. They can be themselves. It takes time to find everyones voice, but as people have their own, companies too.

And once you find it, you become unique. 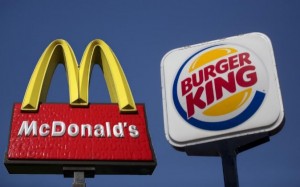 Burger King on August 21st, proposed to McDonald’s to be in the same team for one day only. Which day? you might ask. On September 21st, Day of Peace.

On its campaign, Burger King wanted to sell a unique burger for that specific day, the “McWhopper” (Big Mac + Whopper), a combination of the two best selling products of each chain. The action would be hold on a supposed shared store in a city right in between the headquarters of each company (McDonald’s = Chicago; Burger King = Miami), which is Atlanta. Moreover, the employees would dress a unique uniform which is half McDonald’s corporate uniform and half Burger King’s uniform. Further details in the official link http://mcwhopper.com/ and in the video below.

In my opinion this has been a really smart move from Burger King, communicating the proposal in a peaceful way, with a brilliant campaign, very into-the-detail plan (McWhopper naming, Atlanta location, ingredients, uniforms, packaging, etc) and most important, in a very good timing.

Predictably, McDonald’s rejected the offer. From my point of view if McDonald’s accepted the proposal, it would be giving all the credit to Burger King, in a moment where McDonald’s is weak, having some difficulties to sustain its own business internationally. This would affect McDonald’s image and increase Burger King’s image perception. Giving to Burger King a more leader role in the market, at least in its communication.